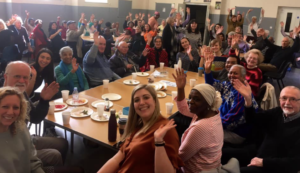 Over the last couple of years, loneliness has been in the news a lot. Major documentaries including Channel 4's Old People's Home for 4 Year Olds and BBC 1's The Age of Loneliness have brought the issue to the mainstream. We have become familiar with the heartbreaking reality that nearly 4 million older people in the UK say the TV is their main form of company, and that well over 1 million say they feel 'chronically lonely'. The Jo Cox Loneliness Commission reported on how we can all 'connect for a kinder tomorrow' to help reduce what many are calling a 'loneliness epidemic' across the country.

London is ranked one of the loneliest cities in the world, and the issue is particularly acute in the boroughs we’ll be working in, Tower Hamlets and Hackney. Older people living in Tower Hamlets are predicted to be the loneliest in all of England, according to a model looking at risk factors for loneliness which measures the factors that can increase the risk of loneliness in older age. One of these factors is low income: half of all older people in the Tower Hamlets live in an income deprived household. That’s the highest level in England by some way, and three times higher than the national rate (16%). Hackney is ranked second of all local authorities in the Index of Deprivation Affecting Older People, after Tower Hamlets.

With loneliness shown to be as bad for our health as smoking 15 cigarettes a day, and bringing on strokes, heart attacks, dementia and depression, we know it is a huge challenge for our boroughs.

But it surprises many people that loneliness is not simply a later life issue. On the contrary,  research has shown that young people are amongst the loneliest groups in the UK. Social media, FOMO, and work, education and housing pressures all play a role.

There are already amazing groups doing wonderful things with older and younger people in Tower Hamlets and Hackney, and East London Cares is working closely with those organisations, as well as councillors, businesses and individuals to bring those two generations – who live side-by-side but can too seldom interact – together.

It's through those deep roots and those new connections that we can be confident that while east London is changing, it’s still a place of togetherness, shared experience and community.

We want to work with you to tackle loneliness – so please get in contact to discuss your ideas or how you're already building connections, or sign up to volunteer with our Social Clubs or Love Your Neighbour programmes.