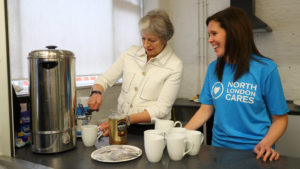 "Inspiring: a community network of young professionals and older neighbours determined to combat loneliness in our society – one of the greatest public health challenges of our time."
Theresa May, Prime Minister

"It's great to see so many individuals and organisations that are doing great work...like North London Cares which is helping the old and the young to connect."
Sadiq Khan, Mayor of London

"This lot are amazing."
Rhiannon Cosslett, journalist, The Guardian

"The best thing I've heard in years".
Attendee at the Campaign to End Loneliness Conference

"One of the most positive projects emerging from post-riots London."
The KentishTowner

"London may be the world's greatest city but can be isolating for many. Fine film on @NLCares' work connecting people."
Stephen Fry

"A brilliant initiative... I'd roll out the North London Cares franchise across the country."
Tim Montgomerie, The Times